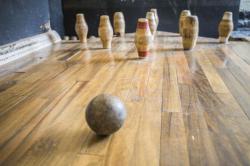 The Likely Lasses were runners up in Division Two of the Ladies Skittle League and achieved promotion to Division One.

Conservative B won their last match of the season in the Central Skittle League.

The Conservative Club hosts a number of skittles teams, if you're interested in joining a team, the links below can be used to obtain further information:

If you would like more information on using the club as a venue for your team, please contact us on: wsmconclub@zen.co.uk